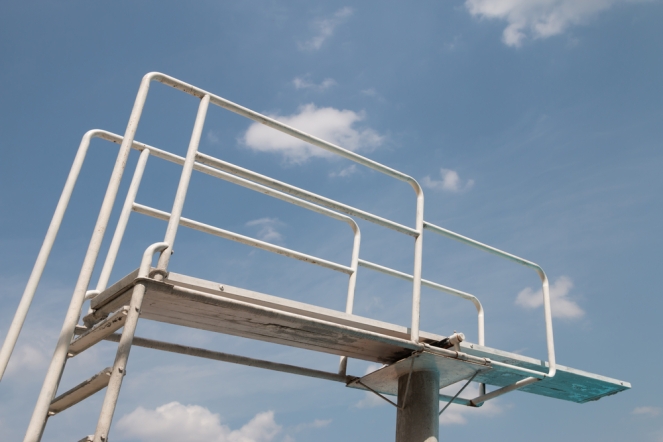 I did it.  I quit my job to pursue my dream of writing for a living.

In a decisive blow to my ego and a major victory for my soul, I mustered the courage week before last to finally pull the trigger.

I put time on my boss’s calendar for a “Quick Catch-up,” yet nothing could be further from the truth.  I have been contemplating this very move for as long as I can remember.

As I walked down the hall to his office, hoping he would be there (and hoping he wouldn’t) and knowing he was none the wiser, my heart raced and a whirlwind of thoughts swirled through my head.  This is the right thing to do.  It’s going to be ok.  Deep breath.  Big girl panties.  (I even checked as I smoothed my skirt before walking into his office.)  And he was there.  Showtime.  And do not cry.  This is a good thing!  You’re finally doing this!  Do not cry.  Do not effing cry.

Quitting is never easy, even if you know in your heart it’s the right thing to do.  We invest so much of ourselves in our jobs, working hard to not only do a good job but to look good, to get recognition from our peers for that job well done.  I have worked 30 years to earn that title, that office, those lofty responsibilities.

My decision to leave was made even more difficult by the fact that I was leaving a very good job, a VP-level job with good pay and benefits.  And unless you’ve been living under a rock on another planet, you know what a terrible mess the oil & gas industry is in.  I was fortunate to have that job I was leaving, when so many, actually about 350,000 including my husband, have not been so lucky.  My leaving was a big leap of faith for both of us.

As I explained to my boss that I was leaving the company, guess what?  I cried.  Ugh.  And it’s so hard to stop when you start.  He was nice about it, offering that we might take a break, reconvene in 20 minutes or so.  I took him up on it, adding to my humiliation.

As I sat on a bench in the park-like setting outside my office (a beautiful campus with many amenities), I thought about what I am giving up and what I am gaining.  I am leaving the security – the black & white – of a full-time job for the opportunity – almost pure gray – of doing what I have dreamed of doing all my life.  Not to rehash that story, you can read about it in past posts, but I have always wanted to write.

I remember as Director of Worldwide Marketing at BMC Software (on the same campus here in Houston, no less) climbing the ladder, 25 people reporting to me from around the world, and envying the writers on staff.  I remember wanting that.  Wanting to be an individual contributor writer, responsible only to myself, to live or die (professionally speaking) based solely on my own contributions.  That was a good 15 years ago.  That was my heart, my soul, reaching out, yearning for that.  Yet my strong ego said, no way, keep going, stay the course, climb the ladder!

Whether or not I know it, once I’ve had that thought, the die is cast.  The intention is out there, and the universe conspires to help make it happen.  Once I’ve decided to do it, I enter into what Brene Brown calls ‘the messy middle’.  From the moment you take that initial step, up to the first rung on that diving board ladder, and you (or any of the other kids at the pool) become aware of your intention, it gets messy until you finally jump off.

It’s scary. You second guess yourself.  You’re easily influenced by even the slightest questioning of your decision.  When I told one of my best girlfriends that I was going to leave my job to write, her first response was, “Wow.  Can you afford to do that?”  My initial response was, “Crap, no.  What am I doing?”  But I stayed the course, finally realizing that I cannot afford not to do this.

Since before I started my first job at an ad agency in Austin in 1985, my ego has been in charge.  It has been my defense mechanism.  Money has been my currency of power.

I am done with that.  It’s time for my ego to step aside and let me be me.  Transformation without tragedy and all.  I am ready to meet and be Karen v3.  Karen Abercrombie, freelance writer.  I have no idea what the future holds.  But bring it on.